Maybe it is the preschool teacher in me, but when Lewis recently started seeming bored with all his toys one of my first ideas was to start introducing a sensory bin into his daily play.

He has a ton of these plastic links, so they seemed like a good starting place for his first sensory bin. A lot of the things I would normally think to use for an older child (rice, beans, dry pasta, cotton balls, shredded paper…) are not things I feel safe giving him, since his main play style is still to explore through putting everything in his mouth. He tasted the links, even though he has played with them often before, and explored by pushing and pulling the pan and dumping it on the ground.

He also had to check out the pan with his mouth, since this was something he hadn’t encountered before and he hasn’t gotten a ton of experience with metal objects.

Using the cake pan was a quick fix since I wanted to get started with this, but I have since picked up a plastic bin to use. It is roughly the same size/shape as the cake pan which is perfect for him. Small enough and shallow enough that he can easily reach in and none of the toys are out of reach, but big enough to put several toys into. When he is older and more mobile we will upgrade to a much larger bin.

The links worked well for a sensory bin, and we played with this for three days. Ribbons would work well too. Water is another option at this age, but since he likes to push, pull, and DUMP things I will save that for a day when I am in the mood for a mess! I did see a genius idea in the comments of a blog to pour the water directly into the highchair try so it can be splashed in but not dumped, so I may give that a try. (I believe that was suggested in the comments here.)

I also plan on doing some bins that are more of a discovery bin/treasure basket sort of idea. I’ve started us off with a themed bin on the color red. 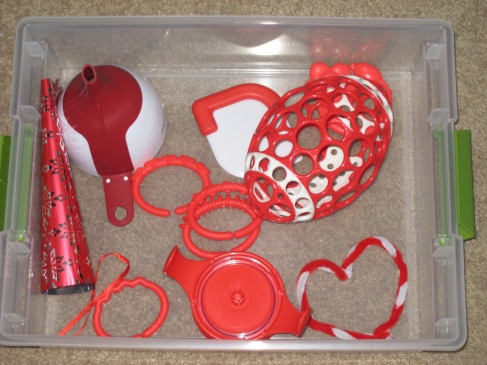 Included in this bin:

I introduced this yesterday afternoon and he kept busy for fifteen minutes of solo play while I did some cleaning. When I saw he was getting restless I sat down to play with him. He reached out to be held, and then kept busy for another ten minutes sitting on my lap while playing. It was interesting to see how he played differently with me holding him. Playing on his own he explored all the bigger objects and the wrapping paper and ignored the smaller things. He also seemed to like the funnel the best and spent a long time gumming it. After I joined him he explored the other toys a little bit but also seemed less focused on one thing and instead practiced picking up and putting down everything over and over.

I plan to make this a daily part of our play, probably bringing it out around the same time of afternoon each day so it becomes a routine. (And possibly sometimes in the evening if he wants to show Daddy.) I think each bin will probably last us for around 3 days, but I just plan on paying attention to his cues and switching it up once he seems to be getting bored and unfocused. I plan to continue doing color themed bins for a while. Most of his “usual” toys have a million different colors on each, it’s hard to focus on any one color. I think isolating a single color will help it feel less chaotic and also help him learn to recognize the different colors separately. Play At Home Mom also has some great ideas for using color themes in other play, such as in the bath.

One more type of bin I’d like to try with him from time to time is the Heuristic Treasure Baskets as described on The Imagination Tree blog. The idea behind these baskets is to give baby things to play with that include natural materials and every day objects in a variety of shapes, colors, textures and materials. One of the big focuses of this is to avoid plastic which I think is great when so much of today’s baby toys are made of plastic, plastic, and more plastic. I am trying to keep this in mind when creating his themed bins and including some objects of different materials, but it would be fun to try to make some bins using zero plastic.

I am looking forward to seeing how his play grows and develops as we continue with this, and excited that as he gets older I will be able to safely introduce more and more different objects for him to explore!