Happy Friday everyone! I just glanced out the window and noticed some snow coming down, but it’s ok because tomorrow will be warm and melt it all! The weather this week has been alright but not awesome. Fairly cloudy and windy and chilly, but not full on winter frigidity. We’ve still managed to get out most every day, but usually haven’t wanted to stay out in the wind for super long and have needed some nice warming drinks when we come back in. Lewis’ favorites are hot cocoa or warm milk with a little honey, vanilla, and cinnamon added. Mommy prefers chai or other tea, and when I offered some to Lewis he had to explain to me that “tea not a treat, Mommy!”

We had a bit of a rough start to the week since Lewis was hit with a tummy bug over the weekend. Nothing too severe, but he was fairly uncomfortable and unhappy and wanted lots of snuggles and down time. Once we got past that we’ve been enjoying a pretty busy week full of lots of Lewis-led learning and activities. 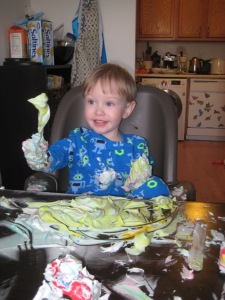 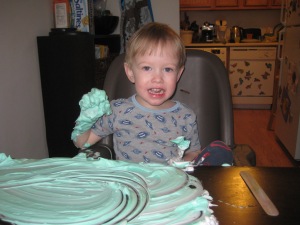 He had so much fun with the shaving cream he requested it again the next day. This time he didn’t really want any toys for it, he just dug his hands right in and his messy hands became monsters/airplanes/people/creatures and most anything else you can imagine! 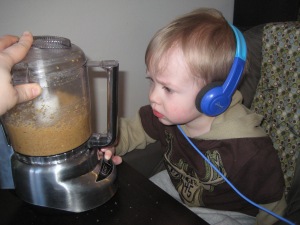 After a snack of peanuts one day he suggested we make our own peanut butter. Headphones were required to block out the noise after we decided that he couldn’t push the button with his feet while covering his ears with his hands. 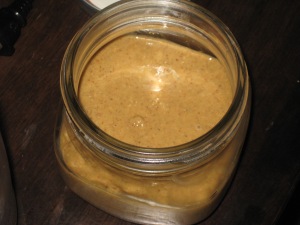 Our beautiful and yummy jar of mixed nut butter. We were short on peanuts so I just got out all our nuts and Lewis put together a specialty mix including peanuts, walnuts, pecans, almonds, and sunflower seeds! We also added a pinch of salt, 1 T honey, and 2 T olive oil. 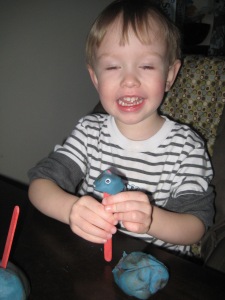 Making playdoh monsters. Lewis’ favorite was this puppet creation he made with a popsicle stick. (Thanks for the idea goes to http://craftsonsea.co.uk/monster-play-dough-invitation-play/ , discovered through Pinterest). 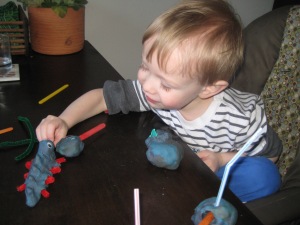 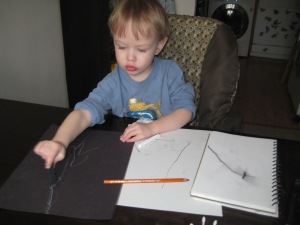 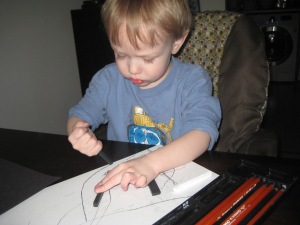 He had fun using different pressure to make lighter and darker marks, and of course smudging the charcoal around the paper! 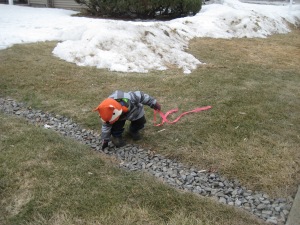 He’s reached the stage of finding “treasures” while we are out playing and walking. Today’s find: a long pink ribbon that fluttered in the wind!